The moon is made of cheddar cheese?

The moon was orange last night... As many of you know, there was a total lunar eclipse last night. Lunar eclipses are rarely visible in the northeast US sky, and this would be a never-repeated-in-my-lifetime event. The reason that we could see this eclipse in Maryland is that the sun is at its most southern point on the winter solstice (December 21). The sun has to be opposite the moon for a total eclipse to occur, and the full moon this month is high in the northern sky.

For a science geek, this was an opportunity not to be missed. And it was a clear night.

The eclipse was maximal at 2:41 am EST, so I set my alarm for 2:30. I could see the moon out of my bedroom window, though it took some contorting. It wasn't like a solar eclipse, where there is a black shadow obscuring the sun, but the moon was definitely darker, like a shadow was obscuring it. TheHusband and I got dressed and trudged outside to take pictures (and see it without kneeling and twisting about to see it out the window). I tried to wake ThePinkThing, but she grumbled, rolled over, and pulled the cover over her head. Her loss, and she's grumpy about it this morning.

At 3:17 am, the moon's color was the most orangey-red. Really lovely and obvious to the naked eye, even without binoculars (TH's binocs are 30 years old and show their age). We have a high-level point-and-shoot camera with lots of settings but no tripod. We were able to get some really nice shots anyway on the "Nightime Nature" setting. 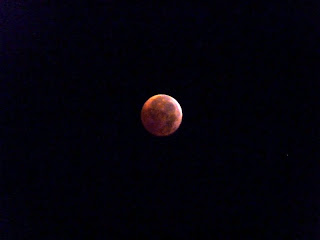 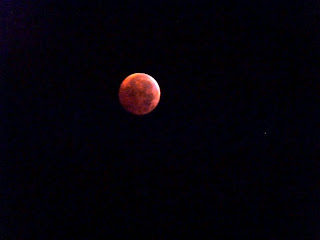 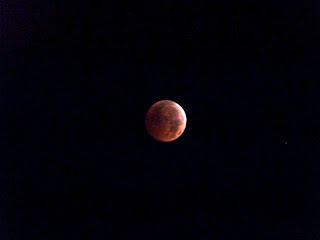 Now I want to see a total solar eclipse, someday. And the Aurora Borealis. Don't you?
Posted by neurondoc at 10:38 AM

It was cloudy here. *pout*

I have never seen the aurora borealis though. I grew up way north, but not quite far enough. Either that or I go to bed too early...

I'm glad you got to see the moon disappear!

When we were little my Dad would wake us up, wrap us in blankets if it was cold, and carry us out into the backyard in the middle of the night to view all manner of heavenly events. As we lived in Western New York it was often cold and snowy. We got to see Auroras (in color), Sputnik and other early satellites wizzing by overhead, meteor showers, unique cloud & ground fog formations. Probably some of my favorite memories of my Dad.

It was cloudy here last night, so no eclipse here. TPT doesn't know what she's missing!

These days, sleep is more important. I hate getting older. *sigh*

At least I've seen lunar eclipses before. Total solar eclipses, too. But only such glimpses of the aurora as one gets very occasionally in S Ontario. That I would very much like to see.