No room for the kid! 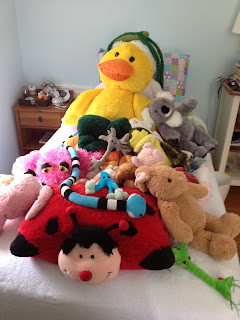 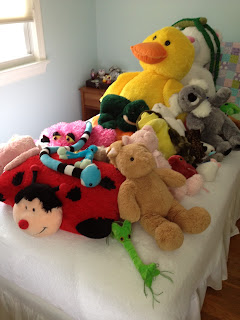 Here is what ThePinkThing's bed looks like when it is neatly made and all of her stuffed animals are on it. Most of the time, though, they live in "The Pit" (the floor between the bed and wall). I like how there are giant germs and a few neurons in the mix.
Posted by neurondoc at 6:00 AM 2 comments:

I am the best mom because...

I was invited to the Special Person's Tea at TPT's class this afternoon. All of the kids wrote a letter to their special person, and they were encouraged to read it to everyone. TPT was one of the first (she gleefully volunteered). Here is TPT's letter to me:

I remember when we were out shoe shopping and I really wanted a pair of shoes. You said I could buy them myself. This is important to me because it taught me responsibility. I finally was able to buy the shoes after lots and lots of chores.

Thanks for being the best mom ever!

(Funny, I remember that a bit differently, kid. The deal was that we'd each pay half. When we got home from the shoe store, you went up to your piggy bank and came right down with the money. A little creative license?)

It is definitely disconcerting to have my remarks come back to haunt me in a public forum. It certainly amused the other adults there. And yes, I did tell her that she could be flattened if she was run over by a car.
Posted by neurondoc at 4:06 PM 2 comments:

Our house was built in 1962. It is a "split-Colonial", whatever the heck that is. The house was built during the heyday of teeny galley kitchens in nicely-sized houses (and let's not even mention the size of our master bath...). It isn't a generous space, isn't a "cook's kitchen", and is NOT set up for more than one cook at a time. Not a social kinda kitchen.

We renovated the kitchen in spring 2003, because we had to. Some of the drawers in the cabinets would literally fall out if they were pulled out too far. Note that "too far" was a little more than halfway. I nearly lost a foot to the silverware drawer one night. When the contractor pulled off the countertop, the entire lower cabinet section fell in pieces to the floor. He had no idea how it had been held together. I will admit that the appliances were new -- purchased by the son of the owner in order to make the house sellable. The whole family was a bunch of cheapskates based on the quality of the work that had been done to the house over the years (they owned it from ~1965-2000, when we bought it). The dishwasher was the cheapest model that Sears sold at the time. The fridge was pretty close to the bottom. There was a teeny little wall oven. The only nice thing was the cooktop -- a flat radiant heat cooktop that worked well.

So we decided on a budget for the renovation and made some cuts to keep the costs under control. I think we went about $50 over budget, which was great. What was not great were some of the decisions that I (fine, *we*) made to control the costs. We kept the white linoleum floor, which was a reasonable, but not pretty, choice. However, it's still in decent condition, even 9 years later. We went with white cabinets instead of wood, which I regret. We didn't get the cabinets with those fancy no-slam drawers. I regretted that decision too, because I did slam a drawer once, and the face fell off (not my face, you silly readers, the drawer's face). TheHusband was highly displeased. Instead of solid granite countertops, we used granite floor tiles and have a tiled look for the countertop, as well as the backsplash. (It cost ~$400 instead of $3000). I hate the way it came out. The contractor did a good job on it, and it looks just as he said it would. But I had buyer's remorse within the first week. TheHusband said that I had to live with it, but that we could replace it after 10 years. I agreed (crabbily) and am looking forward to getting new countertops next year.

We chose well-rated appliances that were middle-of-the-pack appliances based on cost. The only item that was more expensive than should have been was the fridge. I really, really wanted the upside down refrigerator (freezer on bottom). The drawer-type freezer has turned out to be highly annoying, as I can never find anything in it. But that's a different issue.

A bit over a month ago, the diswasher died. So we bought a new one. I don't like some aspects of the new one, but, boy, is it quiet. Two days ago the microwave died. Why it couldn't be the fridge that died, I don't know. Is there some sort of planned obsolescence about kitchen appliances for the 9-10 year mark, nowadays? Mind you, my grandparents are using a 30-something year old dishwasher. Things were made better in the good old days (said in crotchety-old-lady voice).

I wonder if I can convince TheHusband to get a new fridge this weekend, too. Nah, didn't think so. But it doesn't hurt to ask.
Posted by neurondoc at 2:35 PM 1 comment:

Migraines and medications and analgesic rebound

I've been taking narcotics chronically since October 2010, because of the residual back pain. I had taken them from Nov 2009 to May 2010, while I was on warfarin for the post-op DVT/PE. Because you are my adoring audience, you are well aware that I had a 2nd DVT (not yay) in Oct 2010, which required me to take rat poison forever (also not yay, but at least I didn't have another PE). NSAIDs (those lovely anti-inflammatory meds) also thin the blood and make bleeding ulcers and bleeding in worse places (like the brain. I'm fond of my brain as it is...) more likely when combined with warfarin. For this reason, my hematologist limited me to a total of 8 naproxen 220 mg tablets (Aleve) per month. I can't tolerate the majority of neuropathic pain meds (my brain is messed up enough and those meds make it even worse!), so they are out. Thus, I went back on narcotics to keep the chronic back pain under control.

I hate the idea of taking hydrocodone daily, so I keep it to the utter minimum -- one half of a 7.5 mg hydrocodone tablet daily, with some days requiring a whole one. It's a very small dose, and I haven't had to escalate the dose in the year and a half I've been taking it. Recently I've wondered if I could actually come off the daily hydrocodone. The back pain is tolerable though still present. I have no other ailments right now that require pain meds (hello, comminuted fracture of left wrist).

So I stopped taking the hydrocodone on Sunday. And I've had a migraine now for the past 2 days. The back pain has been manageable (!) but this headache is really annoying. I suspect that there is a component of analgesic rebound to this migraine, which is especially irritating.

Analgesic rebound headaches (ARH) are chronic headaches caused by overuse of short-acting pain meds (analgesics). They are notoriously tough to get through. They can take up to 2 weeks to resolve, and one has to be careful not to substitute another short acting analgesic medication for the offending one. I've supported many a patient through this process. I just would prefer not to have to go through it myself, to be honest. This morning, I was forced to use up one of my precious Aleves, as I woke with the same migraine I went to bed with (no, I'm not talking about TheHusband, you silly people). Aleve usually works for me to abort a migraine. Not today. I hate when I experience first-hand what I've treated patients for.

I will stop complaining and look on the bright side, now. Thanks for listening.

Migraine pretty much gone. The back pain is definitely worse, especially in the morning. I was hunched over quite a bit this morning, but moving better by the afternoon.
Posted by neurondoc at 1:07 PM 5 comments: