I let my kid eat something that was pretty much the most horrifying thing I'd ever eaten. Does that make me a bad mother?

I have a friend, John the Scientist, who is (perhaps pathologically) interested in (and/or entertained by) exposing his friends to "food" that is just barely on the correct side of edible. Seriously. You can't imagine some of the stuff he's sent to mutual friends, at least one of which required a hazmat suit. I tried stinky tofu with him and survived, as did our friend Nathan. Barely.

So what does it say about me, that I went back to the same restaurant with JTS, but this time I brought along TheHusband and ThePinkThing? Specifically so that TPT could try stinky tofu. Please note that there was no coercion on either my part or JTS's. He is willing to offer the opportunity, but he doesn't push. TPT wanted to try stinky tofu. I'm not sure why. When I asked I got a garbled answer that boiled down to "I want to taste how bad it is." I'm not one to prevent the kid from trying new foods. She's got a reasonably wide palate for a 9 year-old, especially since TheHusband is a "meat and potatoes, hold the potatoes" kinda guy. The other food I had had at Bob's Noodle 66 was reasonably good (though the jellyfish had an odd consistency). So we went last night. Even though he couldn't smell it, TheHusband said "NO WAY", although he did try everything else we ordered. I also bailed on the stinky tofu. Oncewasfinethankyouverymuch.

TPT tried it. I'll let the pictures speak for themselves. 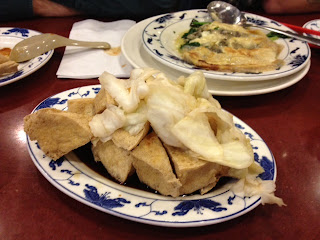 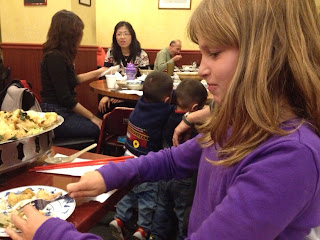 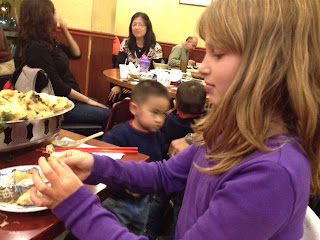 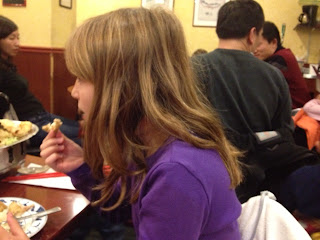 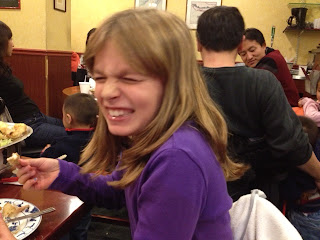 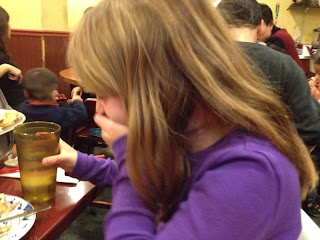 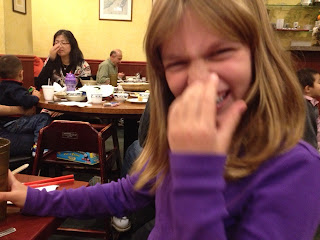 Next time JTS is in town, we will go to a regular old Mexican restaurant. :-)
Posted by neurondoc at 10:20 AM 6 comments:

I totally realize that I look back at summer family vacations in Atlantic City and Margate, NJ through the rose-colored glasses of fond memories. When I think of the beach, I don't think about the more beautiful beaches I've been to as an adult, I think of the Jersey shore with all of its problems.

My father grew up in Philadelphia. Atlantic City was the summer play place for Philly residents when he was a kid (and the nearby towns remain so even now). He spent the majority of his summers in Atlantic City with his older brother and mother. They would rent rooms in a boarding house or a small apartment and spend the entire summer there. My grandfather, who worked 6 days each week selling and delivering furniture, would take the train down on Saturday after work, then back on Sunday night or Monday morning.My dad has a boatload of stories about his summers in "AC", including seeing parts of the boardwalk float down New Hampshire Avenue during the Great Atlantic Hurricane of 1944.

My mom, on the other hand, is from northern NJ. She didn't go to the shore each summer like my dad, and she certainly didn't have the vivid stories that my dad did. North Jerseyans didn't go all the way down to AC for summer vacations; they tend to go to Seaside Heights, Long Beach Island, and other slightly more norther NJ shore towns. That was true when I was a kid -- we were the only family from my town that would regularly go down the shore (never "to the beach") to AC instead of the closer shore towns. But Atlantic City had lures for my brother and me that no other Jersey shore town had -- our grandparents and our cousins. My cousins are close in age to me. Laura is 11 months older, Rob 4 months younger, and Rich 3 years younger. My brother was in the middle there (2 years younger than me). Five kids within 4 years of each other, a mix of boys and girls, a mix of squabbling, teasing, playing and love.

Until they became sick in the late 1990's, my father's parents summered in Atlantic City or Margate, NJ. Initially, they rented a small apartment at the "Biarritz", which sounds much, much more posh in name than it was in reality. It was an old building on Iowa Ave, on the second block from the beach, right near where the Tropicana is now. The elevator was ancient, and endlessly fascinating to two kids from the suburbs -- it had a gate that swung across, and a door that opened out. Not the sliding solid metal doors on every other elevator we'd been on. The place was very small, too small for my parents, brother, and me to stay. So, every summer until 1979, we'd spend 5-7 days at the Ascot motel. Even in the early 70's it was a bit of a fleabag, but it had some great points: it was less than a block from my grandparents' place, it was on the beach block, and it had a pool. A pool! I learned to dive at the Ascot (there are some old home movies somewhere to support this). I learned to play "Marco Polo" in the pool at the Ascot. I'm sure that I ran around the pool (NO RUNNING!!) and pushed my brother in, too.

The beach in Atlantic City was fabulous for kids back then: wide, sandy (duh), with crashing waves that weren't too big. We spent hours there with our cousins -- making sand castles and drip castles, playing in the shallows, "jumping the waves" with our fathers, having sand fights. I remember (vividly) being pinched by a crab on my foot (and crying) and another year seeing my cousin Rob get pinched on his butt by a crab.

Then there are my memories of the food on and off the beach. I remember waiting desperately for the ice cream man to come and getting to pick something out. My favorites were Italian ice (lemon) or frozen chocolate covered bananas. We had plenty of snack food (courtesy of my Jewish grandmother), most of which was unhealthy. The first time I ate Pringles was on the beach in AC (potato chips in a can -- I'd never seen such a thing!). I swear that Pringles were invented just for kids at the beach. My mother fought the losing battle to make us eat something good for us on the beach. I don't ever remember packing lunch to eat on the beach, though. At some point it would become obvious that we (my three cousins, brother and I) were hungry. So we would schlep up to the boardwalk and eat hot dogs or hamburgers and fries or other equally nutritious fare from a shop or stand. Then it was back to the beach for more play. At some point we'd trek back to the Ascot for pool time.

We ate at certain restaurants that each summer. Abe's Oyster House comes immediately to mind. It closed years ago, but I distinctly remember all of us standing and waiting for a table, watching the lobsters in the tank. The White House Sub Shop was a perennial favorite. If there is any food for which I'd go off the gluten free diet, it is a cheesesteak hoagie from The White House.

And then there was the boardwalk of old. Not the boardwalk of now or of last week. The boardwalk of the 1970s and 80s. Shops that sold t-shirts, frozen custard, and knick-knacks. James Salt Water Taffy, where we would always pick up a few boxes to take home (peanut and molasses were my favorite flavors; the licorice ones were avoided at all cost). Steel's Fudge, where simply entering and smelling was glorious. And then there were the arcades. Specifically FunSpot and Playcade, where we played skee-ball mostly, trying to rack up enough tickets to get a good prize, not a crappy one. We'd usually schlep to Ocean City (NJ, never MD) to go to one (or both) of the amusement parks one evening. Then we'd fall into bed completely worn out, only to wake the next morning for more of the same.

Eventually my uncle bought a little house in Margate, on the second beach block, and my grandparents summered there for a bunch of years. It was a house. A house a little over a block from the beach down the shore! We continued the tradition of a week or so prior to school starting with the family at the shore. Amazing how many people you can fit into a house at the shore -- my grandparents had their own room on the first floor. Upstairs were a full bathroom and two bedrooms, one big and one small. Laura and I shared the little bedroom. There was room for a double bed and a little dresser and that's about it. The other bedroom was much bigger and housed my uncle, cousins and brother. My parents got stuck with the couch in the living room. 10 people, 3 bedrooms and 2 full baths -- heaven in many ways, for the kids, at least. We found new restaurants in Margate but still went to the arcades and the White House. And Lucy lived in Margate. We would walk down the beach each summer and say hi. Eventually we grew up and stopped having family vacations down the shore.

TheHusband is from Ohio. He doesn't like the beach. He doesn't have memories of this kind of vacation to lure him to the Jersey Shore. His mental image of Atlantic City focuses on the casinos and the gambling. We've gone down the shore as a family once, when ThePinkThing was 18 months old. She had no cousins to play with. I had no cousins there to hang with. It rained 5 of the 7 days we were there. TheHusband has expressed no interest in going back again.