Evil Kitty and the BSOD 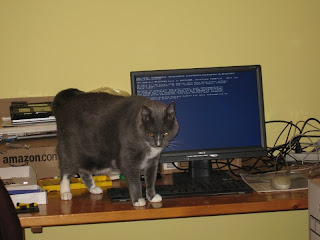 "Master, this is what happens when you fail to do my bidding..."
Posted by neurondoc at 10:01 PM

with apologies to the Monty Python crew...

No one ever EXPECTS the Blue Screen of Death!!

Sorry, you have my sympathy, I got burned by it last year.

Why? Because it makes us money.

And it makes the cats money as well.

Vince, BSOD's help pay half of my mortgage. TheHusband is a hardware/network kinda guy. The BSOD in the picture was probably a customer's hard drive in TH's test machine... It made such a good picture, though.

Hmm. Did I see X-rays emanating from kittie's glare?

So, I've been saying for years that the way to make millions is to have a monthly raffle. You win the raffle, you can throw this computer off the top of the building OR smash this computer into bits with the big mallet and so on and so forth.

People would SO pay money for this.

Happily, I did not know what the problem in the picture was, and could not identify the BSOD. Glad it was pointed out in the comments.

Now, spinning wheel of death..that is a WHOLE other story. That I know. :(

I worked at a hospital that had two IBM System 36 mini-mainframes on site, which had been nursed many years well beyond their normal life span. They were cranky and we had to keep the Admin one happy because it did Payroll. I even got to practice what little COBOL coding I knew on it from time to time!

When we finally merged with the big hospital up the street and they helped finance networking our whole facility, our CFO at the time wanted to raffle off chances to take a sledgehammer to the little monster. Believe me, we all wanted a shot at that thing.

Cooler heads prevailed and I found an outfit that could recycle or refurbish every piece of ancient tech we were pulling out of our buildings. And they PAID us to come haul our junque away!! We're talking a small warehouse full, stacked at least counter height, with barely a space for a trail through the wreckage!

TheHusband once threw a recalcitrant victim (er... computer) off the back porch into a dumpster. He said it felt great!

I once got to empty two magazines from a WWII Thompson submachine gun into an old computer. Then I got to do it to another one with an AK on full auto. They had the old CRT monitors that blew up pretty good, too.