The Curse of Lake Wallenpaupack

Yes, it struck again. I've mentioned that whenever we visit my friends at their house in the Poconos, something bad seems to happen. Even when they come to visit us, badness occurs. I did threaten to leave TheHusband home if we went to the lake house again. This time, he wasn't the problem.

We wanted a low-key, relaxing summer vacation this year. Last summer we went to Great Wolf Lodge right before school started, which was fun but frenetic (add friends with 4 kids and frenetic is definitive). So we tempted fate and stayed at our friends' lake house in the Poconos for a WHOLE WEEK, from 8/21-8/29. I was really tempting fate with a whole week's stay.

Our trip there was mildly annoying, because we left an hour and a half later than planned, forgot the blow-up mattress (thankfully our friends brought theirs), and left the car adapter for the DVD player at home. A Radio Shack along the way didn't have the right tip. So we had a 4 hour car ride with an only child and no obvious method of entertainment (it was dark for almost the whole ride). We survived. And, yes I am fully aware that everyone in my generation (and a million generations before mine) all went on long car trips without such nice methods of entertainment. Yes, yes, I know that. But it does make things so much easier.

The first weekend was nice, although the weather turned against us on Sunday (low 70s and rainy). Seven and four year-olds don't mind going in the lake or hot tub when it's raining. Their parents don't love standing around in the rain quite as much. Later that day, our friends went home and we had almost a whole week of relaxation and fun ahead of us.

It was fun and relaxing. Perhaps a bit more relaxing than expected, as it rained and was cool from Sunday through Wednesday. It was like 500 degrees every day this summer, except that week. Where's the justice in that, eh? We went to 2 different "family fun" places, and ThePinkThing played skee-ball, air hockey, and other arcade games that (of course) promote mental development. TheHusband and I had our usual no-holds-barred, cutthroat game of air hockey, for which I will sacrifice a certain level of back pain. I WON, OF COURSE. We went to a mall to buy some of her school clothes. We drove to NJ to see my grandparents, who live about 2 hours from Lake Wallenpaupack. I even worked one of the days. Not exactly the activities I was expecting for a vacation at the Poconos lake. I figured that our badness this year was the weather. No biggie in the real scheme of things. 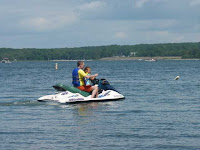 Thursday the weather cleared up, although the lake temperature was, um, cool. TheHusband had promised ThePinkThing that he would take her Jet-Skiing, and Thursday was the day. Riding on a Jet-Ski was basically forbidden by SpineDoc for me ("Are you nuts? You had a lumbar fusion a few months ago. You know better than that..."), so I was the cheering section on shore. TPT enjoyed it but got really cold. She also said that she liked going 10 mph better than 40 mph. I wonder what that says about my husband's aquatic driving skills? Friday we went to a very nice beach at the lake. Sunny, nice, cold water, few people, lots of sand, very attentive and hungry ducks. (Did you know that ducks eat ice cream sandwiches? I didn't until that day.)

Friday night (8/27) my friends and their daughters arrived. (Yay, PinkPlaymates! And grown-ups to hang with, too!) Saturday was another beach day. One nice thing about kids of a certain age is that you no longer have to hover over them or watch them every minute. 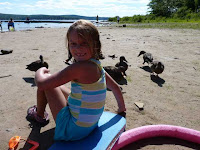 On the Sunday morning I was silently congratulating myself for surviving the week at Lake Wallenpaupack unscathed. In retrospect, I just should've kept my (internal) piehole shut. TPT and the 7 year-old PinkPlaymate were riding their scooters on the back deck, while the four year-old was alternately begging to join in and whining that the big girls weren't playing with her. The wheel of TPT's scooter must've gotten caught in between the slats of the deck, and she fell over, hitting her face on the edge of the bench. She immediately started crying. She is the kind of kid who cries at the drop of a hat, and I have learned to differentiate the "Wah -- that hurt" cry from the "OMFG WAAAAAAHHHH, a limb is hanging by a thread" kinda cry. She let out one of the latter.

I may have mobility issues, but I can move quickly enough when I need to. She hit her right eye (the eyelid, thank goodness) and the bridge of her nose on a square edge of a bench. She ended up with a laceration on the eyelid and some pretty impressive swelling/bruising of the right eyelid. She may have had a hairline fracture of the bridge of her nose, but if she did, it was asymptomatic and non-displaced.

One other bad thing about this most recent evidence of the Curse was that she had her first day of school on the day after the injury. Poor thing was in a total tizzy about going to school with a black eye -- to the point where she "couldn't fall asleep". Once she got to school, she was fine, but boy it was a chore getting her to go. Note that a swollen eye and bruise on her nose didn't stop her from climbing the street pole, as usual. 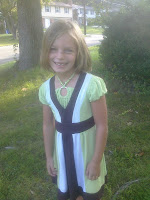 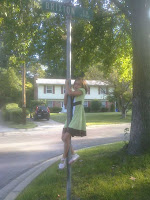 A week after the injury, you can't even see it -- the healing power of children. TheHusband has now refused to visit my friends' lake house next summer, in hopes that the Curse of Lake Wallenpaupack may dissipate, if we stay away. He said that if we go to Alaska instead, it might not find us there. I'm game.
Posted by neurondoc at 6:00 AM

It would appear that you have the same relationship with Lake Wallenpaupack that I have with the State of Ohio. I refuse to cross their border at ground level because every time I do, bad things happen.

I'll cheerfully drive through Canada to avoid it.

(With apologies to denizens of that State that really is out to get me.)