So I am back from my long weekend away. A much-needed mini-vacation. Except it wasn't a vacation. It was a busman's holiday, so to speak -- filled with medical issues.

We drove up the evil I-95 corridor from MD to NJ, leaving around 10 o'clock on Saturday morning, and arriving around 3:45 pm. I swear that *&^%$-ing drive just gets longer and longer each time. Delaware is an absolute nightmare. The NJ Turnpike (which is an excellent road when there is no traffic) was dreadful for about 7 miles. There was a bonus back-up on the Garden State Parkway, near to our final destination (my grandparents' place). Five hours and 45 minutes to go 230 miles. We did have a nice visit with my grandparents, who I love to pieces.

As we were leaving my grandparents' house, I tripped over a carpet outside the back door. Those who know me know that I trip fairly easily, but I don't often fall down. When I do, it is usually a bad fall. This one was one of those -- one of those falls in slow-motion for me and for the onlookers (which included ThePinkThing). I tried to catch onto the railing but missed, so I went head first down about 3 concrete steps. That fucking hurt. I whacked my arm, belly, and head, and scraped my hands and knees. Thankfully I didn't break anything, but I raised a spectacular set of bruises. 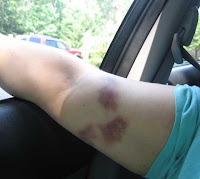 I didn't notice the worst part until Monday, actually. Apparently I landed smash onto a small cyst that is on my belly, at my waistline. On Monday I noticed that it was swollen. By yesterday, it was hurting and today it was red, hot, swollen, and really painful. Yay, an infection. So (never wanting to treat my own self) I dropped by a friend's office. He offered to lance and drain it. I said "No freaking way! How about some nice antibiotics?" So now I am on antibiotics for a giant painful subcutaneous infection on my belly. I am falling apart. The bruises in the picture are 4 days old and healing.

No big deal you say -- it was just a fall, nothing broken, just some bruises, and a small infection. What are you whining about? Why the glum face? Well, I haven't mentioned TheHusband's 9 hour emergency room visit on Monday, have I?

He'd been complaining about belly pain on and off for a few days. On Sunday, I noticed that his potbelly looked bigger than usual, and pointed that out. He agreed. On Monday the pain was a bit worse, but we went to the fair anyway. About 30 minutes into the fair, he was white, sweaty and looked like he was going to pass out. He said that the belly pain was worse and localized in his right lower quadrant. "Crap, that could very well be appendicitis," I thought. He was clearly dehydrated and improved a little after drinking 16 oz of water. We decided to go to the ER anyway, because the belly pain wasn't any better. After much discussion, we decided that B would drive us back to the lake house (~1 hour away), while T would remain with the 3 kids at the fair. We'd pick up our car and drive to the hospital in Scranton where TPT had gotten her stitches. Of course it was a Monday afternoon, so the ER was packed. After about 2.5 hours, TH was taken into a room. Eventually he had a belly CT (yum, drink that contrast now...), which didn't show a surgical abdomen. 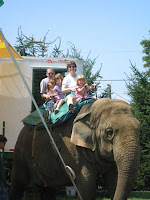 So at 11 pm we trekked back to B&T's house. TH's belly is still a little distended and it still hurts (although it is a little better now), but at least he didn't require surgery. It is off to the doctor on Monday for answers.

Thankfully, TPT was clueless about the ER visit. She had a great time at the fair, answered a question correctly at the Census Booth (who was president of the US in 1790?), saw (and petted) a boatload of animals, rode on an elephant(!) and a pony, 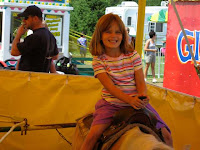 and went on about 40,000 carnival rides. A good time was had by all of the kids, which was really the point of the trip to the fair.

But you do see why I need a vacation to recover from my vacation, don't you?
Posted by neurondoc at 6:00 AM

The elephant's name is Beulah, and she is 41 years old ("just younger than you, Mommy"). Total racket -- $5/person per ride. I hope they feed her the elephant equivalent of filet mignon.

Ouch. I've done those kinds of things, have the scars to prove it.

I'll try to quit whining about my heat rash (just let me scratch...) I acquired on an unexpected walk to the bank for the boss this afternoon...

translation: you need to leave now, the branch manager expects you and is waiting for this deposit.

Even though it was a typical mid-summer day, it was breezy and shady on the way over. Do the banking, have lunch, head back, breeze is gone and the little low area between between the bank and the office had turned into a sauna. Translation...I'm melting!!!

Oh, so very much NOT a vacation - yikes!

You have my sincerest winces for your ouches. Concrete steps? Head? I'm just grateful it wasn't a beginner's ski slope; now THAT would have been dangerous. Hope the antibiotics do the trick.

After telling Alec about the obligatory vacation ER visit for Larry, he also sends empathic winces. I knew he would: we spent 8 hours at the ER *last week* for a possible appendicitis. The same lower-right quadrant pain, but it lasted 3 days before we got sent to the ER. IV contrast and CT showed...nothing. Everything looked okay, labs normal. They sent us home and the pain gradually subsided and disappeared. Hope Larry's follows the same course. Alec also sent horrified sympathies for your fall.

Looked like Allison had a great time! How fun, getting to ride camels, ponies, and elephants!

I'm glad the family seems to be on the mend, but I agree, a second vacation where you HIDE FROM FATE seems to be in order. :)