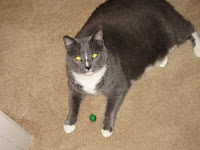 Ajax is our big, intellectually-challenged, formerly male cat. He loves playing with toys, although as he's gotten older (and fatter), his play has become lazier and lazier. Ever since he was a kitten, he's loved what we call "ballies" -- little glitter pom-poms. He loves them so much that he eats them. Every time. Then he inevitably barfs the ballie back up. His favorite place to barf? My bed. Not surprisingly, we ration the ballies, letting him occasionally play with one, keeping a close eye to prevent eating. Last night was a ballie-night. He played with it, until my husband threw it down the steps. At that point the ballie became invisible, even though it was completely obvious at the bottom of the steps.

Silly kitty.
Posted by neurondoc at 6:00 AM

My wife is somewhat allergic to cats, so now having a bedroom with a door, we keep them out.

Julia Child, now an only cat, will sit outside the door when she thinks it is time for me to get up and feed her and rattle the door and kevetch.

When we have people over the then cats (we haven't had guests since having to put the former male down) head to the basement. If it is a large enough crowd we will leave the bedroom door open so guests will use the john in there.

Invariably we would find the cats in there exploring.