ThePinkThing is finished with camp. We have an upcoming long weekend of fun and frolicking, then it's the nose to the grindstone in 1st grade. She's enjoyed her summer, splitting it between 2 camps. She has just finished camp at her aftercare program. I think it was a nice program, iwth just the right amount of structured activities and free play.

When I went to pick my daughter up from her last day of camp yesterday evening, I chatted with a friend, the mother of one of ThePinkThing's friends. The mom happened to mention to me that her daughter had just come back to camp after having had swine flu. 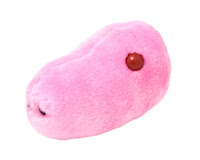 I was shocked, because I hadn't heard anything about it. TPT's BFF was out all of last week with flu-like symptoms, and I had wondered if she had swine flu, but I hadn't heard anything for sure. TPT had a very brief flu-like illness last week, but she recovered quickly, other than a lingering cough. Now, of course, I am wondering if she had a mild case of swine (H1N1) flu. If so, I am glad, because she will likely be protected during the upcoming flu season. I am also glad because TPT's friend has recovered and looks like she is back to her usual wacky self.

What concerns me is that there was no information passed along to the parents that there had been a documented case of swine flu in one of the campers. Obviously, the director shouldn't mention names, but a general notification would have been appropriate. Fergoshsakes, these people post lice and strep notices all the time. The director said that she was expressly instructed by the main office of the childcare organization (they have multiple locations in the DC area) not to mention that a child in the program had swine flu. She was told not even to mention that one of the kids had a flu-like illness. I believe that this was a very poor decision on the part of the main office, and they will be receiving an irate phone call from a parent who is a physician today (namely me). I tried to find out if swine flu is a mandatory reporting disease to the Health Dept, but that isn't clear. Even if it isn't mandatory to report it to the health dept, it is only common sense and fairness to report a communicable illness to the parents whose children may be affected. Adequate notification is essential when dealing this type of highly communicable and potentially life-threatening (okay, mildly life-threatening) illness.

What acceptable reason could they possibly give me?
Posted by neurondoc at 6:00 AM

No acceptable reason, but I think we both know the REAL reason is "money."

Or liability fears. "If we ignore it, it didn't happen."

Hell, over the summer around here they closed two Boy Scout camps, and several church camps when they discovered H1N1 starting up. Sent all the little darlings home with their little swiney bugs.

AND announced it on the 11 PM news that night!

Now that school is back in session all my friends with kids have been home at least 1 day with a sick kid just in the last 2 weeks. Expect the swine flu reports to show up any minute now.

Wow. That's very irresponsible. Here's hoping that TPT had her mild dose and is antibodying away!

As you might imagine, I am quite concerned about Alec NOT getting it, but with college classes now underway, how likely is it that he will not be exposed? His primary is planning on giving him the vaccine, but I know it won't be effective till around Thanksgiving...

Glad TPT had a great time at camp!

Those of you who know me well know that I believe in the "Hygiene Theory" FWIW. I think that, in general, exposing kids to germs and stuff is not a big deal. However, I certainly don't go overboard, and I am a strong proponent of vaccinations. This school year, I will be sure that TPT has a little bottle of hand sanitizer in her back pack. With instructions to use it as often as needed.