It's time for another story from my med school days. This one, although funny, is just not as good as The Toe Story. In this case, I was a 3rd year medical student, in my 3rd rotation of the year -- Internal Medicine. I did part of my Internal Medicine rotation at a community teaching hospital about 65 miles away from my medical school. It was a very valuable experience, because everything was so different from what I was (sort of) used to. The patient population, the nurses, the hospital situation (my med school is in the heart of one of the larger East Coast US cities), and even the medical equipment were different. However, grumpiness and crabbiness will occur in any hospital patient population and did so there, although to a lesser degree than I was used to. However, one patient really stands out in my mind.

This story takes place when I was about halfway done with my 6 weeks at the community hospital. The patient was a man in his late 40's at the time. He was admitted for something potentially bad (Hepatitis C, it turned out to be). But he really didn't want to be hospitalized at all. He, however, did understand that he needed to be in hospital and thus did not try to sign out AMA (against medical advice). But he was a total crabapple and took his seriously bad mood out on the staff, especially the nursing staff. I dreaded going in there everyday to ask how he was feeling ("Crappy. It was crappy yesterday, crappy today, and will be crappy tomorrow.") and check his heart, lungs and all the rest. But apparently I didn't annoy him too badly -- I probably appeared suitably scared out of my wits and so was left alone.

One day I happened to arrive for my dreaded visit at the same time that the nurse was in the room to check his vital signs. She checked his pulse ("stop bothering me, nurse") and his blood pressure ("Ow, ow, ow. That's too tight! Why do you come in and torture me every freaking minute?") and his temperature. By the time she had pulled out the thermometer, he had had enough. Now, this hospital still used glass mercury thermometers to check rectal or oral temps. In this guy's case, he needed his temperature checked orally, so it really wasn't that big a deal. But some medical personnel had to stay in his room while his temperature was taken, because he'd been caught putting his thermometer in his cup of coffee ("just to see if anyone was paying attention."). So the nurse said (in the chipper way that many nurses do) "Now Mr. X, let's open our mouth and put in the thermometer." He clearly didn't like the Royal We, and said he didn't want his temperature taken "again". Without missing a beat, she popped the thermometer in his mouth, while he was complaining. Then she asked if I could stick around until it was done, record his temp and bring the thermometer back to the nurse's station. I said fine and thought "Great. Now I'm stuck in here with Mr Crabapple for 5 more minutes. Grrr."

He glared at her as she left and then got this I'll get you look on his face. Immediately after she was no longer visible, he bit down on that thermometer, breaking it in half, and swallowed the half that was in his mouth, as well as the mercury inside it. I think my eyes bulged out of my head (not literally, but close to it) at that very second. He had a satisfied look on his face, as if to say See what you made me do. Not surprisingly, I thought "Oh shit, now what do I do?" I grabbed the half of the thermometer that had fallen on his blanket and ran out of his room to the nurse's station. When I told the nurse, she didn't believe me -- she thought I had dropped the thermometer and was trying to blame the patient, somehow. As if I would have (or even could have) made that story up. I called up the attending physician and in between hyperventilating and having a cow, I managed to tell him what happened. He came on over and calmly ordered an xray. The patient, not surprisingly, was not apologetic and seemed actually quite proud of himself.

We sent him for daily x-rays over the next couple of days and watched the thermometer's passage through the GI tract. And yes, it all came out the other end. The amount of mercury that he swallowed didn't kill (or even harm) him. Oddly the amount he swallowed might have caused problems if absorbed through the skin...

Here is a picture found out on the Intarweebs of a woman who purposefully swallowed a mercury thermometer. It gives you an idea of what we saw. 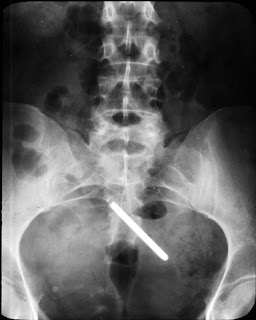 Posted by neurondoc at 6:00 AM

You should have used a rectal thermometer and saved him some time.

Too hilarious! And I, too, was waiting for the rectal thermometer punch line - because if I'd been that nurse I would have used one. :D

I suspect that a rectal thermometer was used for the rest of his hospital stay, but I can't remember for sure. It certainly would've served him right. Punitive vital signs checks...

My brother bit the tip of a thermometer when he was little.

My parents had to "check" his stool samples for the week afterwards looking for the tip he swallows.

IIRC, it never did come out.