My brother and I anthropomorphized many things when we were kids, especially stuffed animals. As he notes in his recent blog post, our stuffed animals had very rich "internal" lives, supplied by our imaginations. They had names (first, last and occasionally middle), family trees, personalities (sometimes too much), and even grade point averages. They lived in their own country and had their own language that we thought our parents couldn't understand (they could, we were wrong about that). Some were nice, some were mischievous, and some were plain old bad. We loved some of the animals literally to bits.

I was so excited to "play" stuffed animals with my daughter, expecting her to glom on to them in the same way Dan and I did. But she didn't. And she really doesn't care about them. She will interact with them -- usually with me providing the voice of one, two, or even three animals, while she is only herself. Occasionally she takes on the role of one of the animals, but she gets frustrated when she isn't being obnoxious in just the right way. I sometimes wonder if her disdain for stuffed animals is due to a lack of imagination, a lack of interest, or simply a lack of siblings.

But my predisposition to anthropomorphizing has made it very easy to get her to eat vegetables. You see, the vegetables on her plate complain. Loudly. They don't want to be eaten (understandably so). And they inform ThePinkThing of that. A green bean on her fork will shriek and carry on and suggest that she eat a different one. The broccoli or cucumber victims are always willing to throw a different one to wolves, per se. She gleefully eats them. Punishment, perhaps, for complaining. Whatever. She eats her vegetables. And I get to have fun while she does it...

So you see why I wonder if Sam Waterston lived in my head, or he modeled Calvin after me (without the hyperactivity). I think it is time to introduce ThePinkThing to Calvin and Hobbes, don't you? 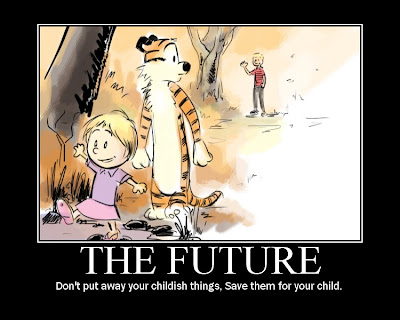 (I found this somewhere online. It apparently wasn't done by Sam Waterston, though I think it's brilliant)
Posted by neurondoc at 7:07 PM

Absolutely - just make sure she understands that she's not allowed to mimic certain aspects of Calvin :-).

Oddly, I wasn't big on stuffed animals as a child, but I am (to some extent) as an adult. Mostly because various females throughout my life have given them to me, and I retain them due to the good memories attached.

I don't play with them, but I do occasionally snuggle with one of them when feeling pitiful and picked-on. Because the laptop is uncomfortable (name that comic!) and the shotgun isn't comfortable, either. Or safe :-).

Warning, watch yourself to see if you think TPT might not want to eat veggies after watching!! Is completely work-safe and kid-safe except for the possible reaction.

BTW, if you like this song, I can recommend others of theirs. The Arrogant Worms are wonderful and very funny.

Is it too late to ask you to teach Alec to eat vegetables, ND? (g)

I had horse statues that I played with in that way; they were my best friends as a child. I didn't just want to *have* a horse; I wanted to *be* a horse. And I still have all of them. Neither boy was interested, but maybe future grandchildren...some of them have pencils taped on as prosthetic legs.

The stuffed animals that the boys loved as toddlers are today beloved family members. And Kitty, the bean-stuffed, chocolate-colored feline neck buddy that was Alec's low dander and maintenance pet in the hospital for so long, still sleeps curled up on the rocker in my bedroom. Every once in while she cuddles on my lap. I can almost hear her purr.

I still have my stuffed bear from my childhood, although he's been patched and sewn up almost beyond recognition.

His name is "Spinoza."

I will do a post about Lamby at some point. I still have her, and she is the one stuffed animal which is not shared with TPT. She is MINE.

Xinef -- that was really funny, but I don't want to put ideas in her head. She takes things so literally...

Yes to Calvin & Hobbes...teach her to make creative snow critters when it snows!!

I still have my first bear, named Teddy, who at 53 he has retired quietly to the chair in my bedroom, with occassional stints on the bed if I remember to make my bed. Much patched and loved, his stuffing is no longer soft. He's currently supported by an eclectic cast of chairmates that include AFLAC duck, Rodney Reindeer, Grumpy Care Bear and a purple Peep Bunny.

Now Teddy, Affie, and Grumpy don't get out much any more, but Rodney happily accompanies me at the holidays when I travel. His little head peaks out of my carry-on to the amusement of both old & young alike. And Peep has been to Orlando twice and will probably go to DC this summer.

Holiday times, my living room is taken over by stuffed critters. Bears, Snoopy & Woodstocks, bunnies, snow goons, lots more Rodneys and Peeps, depending on the holiday!

Who sez you're too old for stuffed animals?? OR Calvin & Hobbes!!

Confession: I've never been able to part with two stuffed animals from childhood, a raccoon and a rabbit (the latter given to me, I think, by my Gramma). They currently live in a storage closet upstairs, on a safe shelf.

I too still have my bear, a Winnie The Pooh, that my Mom wrote way to England for....He is in sad, sad shape, but Much loved, and sits in my bedroom.
Calvin is a fave here with all of the household...Bug is very much a Calvin...something I hope she never outgrows.

I also had many imaginary friends, the most important being Bobby Orr (the hockey player for Boston Bruins). He stayed with me until I met him for real when I was about 4. My Mom set a place for him at the table, and he had his own bed in my room. I was a bit stubborn when it came to people accepting him. Guess Munch and Bug come by it honestly.

So we tried C&H last night for the first time, and ThePinkThing was not impressed. I'll try again at a later point.

My brother and I even took photos of our stuffed animals. I still have some of those photos. I will have to drag them out, 'cause they are hilarious...

You do remember how toddler Miles played with his food, don't you?

Lorraine -- nope! Remember what I happily served him for dinner when y'all came to visit that first time? TPT and I occasionally have the same thing. We call it "a nutritious dinner". Sometimes I am a bad mother...

My boys have received loads of stuffed animals over the years and even though they have their favorites, they've never actually played with them. They are cuddly toys - sometimes, and other times, they are ignored for weeks.

Now, my daughter is already different. She has a doll given to her by her Godmother which she loves (both doll and Godmother). It is a very cute doll, I have to say. And she's got a "Lamby" of sorts - with fabric ears, one ear being a pacifier loop. It sounds wonky but it's very cute and she won't sleep without it. Which makes me buy a second one, of course... (I'm a seasoned mom, yes.) I find it incredibly cute to see how she falls asleep hugging that animal. I don't know why.

Calvin and Hobbes, OTOH, the boys have grabbed and run with. Not the stuffed animal aspect but all others. Including the crazy snowmen... I leave you to fill in the rest.

[Looking around.] What? Other people want so say something too? The nerve...

Yes, both Alec and Kipper love C&H, too. Sadly, no snow.

I have a couple stuffed animals around, but most are gone.

First and foremost is the stuff dog given me by my grandparents--my grandfather died when I was almost five, so not only is it a favorite, but it's one of the few gifts I have for him.

I never named stuffed animals if I could help it, other than Dog or Koala Bear. I have one named animal, because two of my friends were indignant that I didn't give my new stuffed animal a formal name. His name is Mister Huggie.

I'd like to note this continued into adulthood, as my feline is named "Kat"

I've featured a number of mine on my blog in lieu of pet pictures.

Oh, I'm glad you enjoyed it, and not surprised about your decision re TPT. Maybe when she's a bit older!

The first present my mother-in-law gave my elder son was "blue bear". This was a somewhat thread-bare, small stuffed light blue bear. She'd obviously done some mending, and embroidered eyes and a nose. My husband was speechless. He had no idea that blue bear was still around. Didn't mind passing him on to his sons (sweet man!).

My elder son had "bunny", and needed bunny to go to sleep. But didn't care much for other stuffed animals. Younger son wanted to sleep with as many as possible. Didn't play with them, just cuddled and cuddled up to them in bed.

Oh and younger son is a serious C&H fan.

Who is this "Sam Waterson"? Is he related to Bill Watterson?

"Who is this "Sam Waterson"? Is he related to Bill Watterson?"

Oops. Bill Watterson must have been channeling Sam Waterston, the actor.