Nobody would ever accuse me of having a green thumb. Basically any plant that I have ever bought or been given has died under my tender loving care. I try, I really do. But I either over-water or under-water or something. They die. So I no longer have any plants in the house. And our gardening (if you wish to call it that) consists of some flowering bushes (azaleas, hydrangeas, forsythia, and roses) and some purple thingies that are perennials (but I haven't a clue what they are called.

Even given my complete lack of a green thumb, I got sucked into Farm Town. TheHusband is amused and bemused as I tend to my crops daily, hire others to harvest my crops, and hire out as a sharecropper on my friends' farms. I really like this game. It is sort of like SimCity a few versions ago, but without all of the under-structure necessary to run a city. (I don't care about the electricity and water pipes, dammit! Just let me build the buildings...)

I like the social aspect of it -- I visit my friends' farms and they visit mine. My farm has been Grand Central Station (4 people were there at one time!) and also the source of crickets. My best friend is currently living in Germany, and I told her (during one of our Farm Town chats) that I was jealous of our avatars -- they were in the same place chatting, while we are separated by about a zillion real miles. 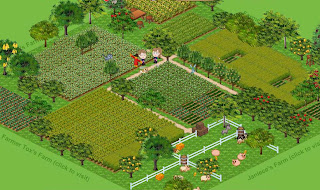 Janiece and I had a hilarious chat that ranged from tattoos to things that are kosher to Jim being an asshole. I saved it, but then accidentally erased it. Trust me, it was pretty funny. Since I can't reproduce the conversation, I'll show you the picture of us chatting This was just after I basically mowed down a boatload of her crops). 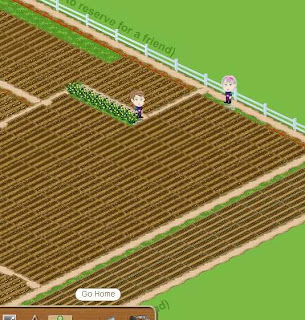 Janiece's farm is very well-organized. I like that. Mine is definitely not organized, and that mirrors my house...

I like how the fields change as the crops grow. And I like to make designs and spell words. 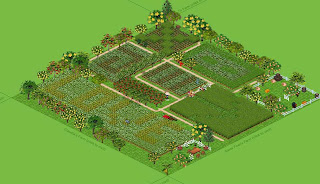 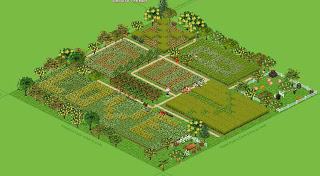 Posted by neurondoc at 6:00 AM

I really think it's the social aspect of farming that sets it apart from other games.

I think we determined that Jim is in fact an asshole, and like tattoos, he isn't kosher, either.

Janiece -- that is true, but we said it so hilariously.

I agree with Anne. Plus the cooperative nature of it, i.e. working with others = everyone wins. :)

There's another farm game, Barn Buddy, where you can be mean to your friends by stealing their crops and causing pestilence. I'm glad Farm Town isn't like that. I had to stop playing Mafia Wars because it was making me seriously cranky and combative.

Although, I do wish the chat feature was better. Being able to scroll up for missed conversation would be good, plus having a much larger font size (because I'm blind dammit).

Also if Farmtown could do something about their servers...they have been having a lot of problems lately.

Kimby -- it is so annoying lately, being kicked off, frozen out, weird fields, buggy code. But it is still fun. And I can't wait to get pumpkins someday. I was admiring yours the other day...

Hah. Yes, MWT, my chat experience is the same. I can either see a bigger field, OR chat in the box. If I'm chatting in the box, then I can't see the icons talking!

Since I am not farming while Teflon Spouse is here (yay), I am missing the bucolic fun!