My main computer, which is a 2.5 year-old Dell laptop, hasn't been acting quite itself lately. Sometimes when I boot it up, I get nothing. Nothing, you ask? Well, almost nothing. You can kind of see ghostly icons that are fractured and liney, but nothing works. It has always had video problems. For a while, everything had a bizarre greenish blue tinge, which was especially disconcerting when we were watching Shrek. And then it really began to act up when we got home from Ohio on Sunday. I now approach it with extreme caution. Will it boot up? Will it crap out in the middle of something? Will I throw it out the window? I have an old Macbook that someone gave to TH, but it has a dead battery, and it is pretty slow. Plus, I am out of Mac-practice, since the last time I owned a (working) Mac was about 11 years ago.

We decided to replace the Dell with a desktop -- speedier, cheaper, sturdier, and the innards can be swapped out as needed (easily, TH says). TH will even build it for me. Yay!

On Tuesday night, we went to the local MicroCenter. We like MicroCenter. They have all sorts of fun stuff in there. TPT likes the aisle where they have the black light thingamabobs that real geeks put in their computers to tart them up. She came over to tell me excitedly that her white shirt turned purple in there.

Anyway we bought a case (boring black), a bunch of innards, and a new keyboard. But the best thing of all is my new toy. TH had a $70 rebate for any HP product but it had to be used by 6/26. Since we were going to be retiring the laptop, we needed a travel computer of some sort. So we bought a netbook. I've been lusting after one of these for months, and with the rebate, it became ridiculously affordable. We bought a HP Mini 1137NR, and it is so cute. TH is not particularly impressed ("it is a cheap slow laptop"), but it is feather-light and connects to the web much more reliably than the Dell ever did. I am typing on it now, as we speak. 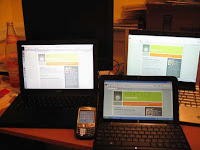 Here you see all of my currently working computers (plus a bonus cell phone), including my old monitor which is just waiting for the desktop to be hooked up to it. The new toy is the cute one in the front.
Posted by neurondoc at 6:00 AM

I love new computers. I own an old laptop, but almost never use it, as I don't travel that much where I need it. I've almost bought a netbook twice, but again, other than they can be awesome (and I'm not talking about ones with XP, I'm talking about ones with Linux that can truly be tricked out and ARE fast) I just can't justify buying one because it would almost never be used.

I shall keep my Netbook envy to myself, and I expect we'll be buying two this summer - one for the SmartBoy to take to campus with him in the fall, and one for me because I wants one.

I pulled the trigger last weekend for a Dell netbook with Ubuntu. Still waiting for it to arrive. Figured it would be easier to use on my lap, one handed. (No, not for that, for typing, you pervs! My right wrist is still too... never mind. The laptop I have is a desktop substitute, which makes it less apt for roaming around the condo, etc.).

Eric, the last two laptops we had were Dells and neither worked quite right. Let's say I wasn't impressed. Add that to the $70 off coupon, and a Dell netbook was right out of the running.

Vince, if travel is the reason to buy a netbook, I probably didn't need one. But I really wanted one, and we'll need something when we do travel (as the Dell laptop's days in this house are numbered...).

Janiece -- we can compare netbooks in September... :-)

My Dell netbook is fast, but mostly because I keep the number of programs on it to a minimum. It boots up and gets me on the 'net a heck of a lot faster than the desktop. I don't use it all the time, but it's a great option to have if I'm tired of sitting at a desk, want to travel with a computer, or as a backup computer (while my other computer was in the shop, I managed to keep up my job search activities, which turned out to be a Very Good Thing).
Congrats on the new acquisition!

Here! Hold this bag of marshmallows!

(places seven tennis balls carefully in the center of the floor)