Spoke to my brother tonight. He's made it to Kentucky! 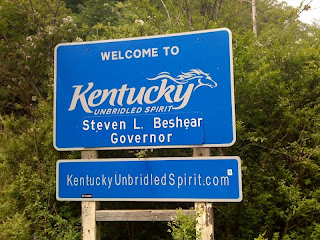 All under the power of his own legs (and the wheels of his bicycle). He didn't have cell access the past couple of days, so this is our first conversation since Monday.

He is camping in Hindman Kentucky, on the grounds of someone's house or the local Historical Society, or perhaps both; I'm not sure. The person whose house it is has lots of cats, and a couple of times during our conversation, I heard my brother tell the cats to "Be quiet out there." Then he says "What is that?" Like I would have a clue what that is... A lynx? A panther? A Bengal tiger? Then he must have looked out of his tent, because he said "Eeeuuw!" rather loudly. When I asked what it was that had been plaguing him, he said it was a large bug. Which was clearly attracted to the light of his cell phone inside the tent. A bug. I'm in Maryland worrying about my brother in Kentucky being eaten by a bug? Humph. Then I heard lots of zipping sounds as he was shoring up the defenses and barricading himself against the giant bug. Hmmm. Maybe he has accidentally gotten onto the set of "Praying Mantis from Outer Space" -- where a giant praying mantis attacks a small town in Kentucky, wreaking tons of havoc and eating up innocent people. No? Probably not.

Anyway... He has ridden from Bethesda, MD to Hindman, KY in 11 days.

It has been pointed out to me that I was being unkind in this post. Please understand that I am not dissing my brother. I am a total scaredy cat and can't imagine camping out alone in a tent. I would probably expire of fear. Plus, I don't see the point of sleeping anywhere where there isn't a bed...
Posted by neurondoc at 7:30 AM

humph. I see that my state was missed!