I had meant to post this yesterday, but instead I posted about the Crazy Driver™.

ThePinkThing had her first sleepover at a friend’s house this past weekend. It was at her best friend N’s house. They have been friends since they were “little” -- before they were 4, and TPT is now 6 (actually 6¼, as I am told). TPT refers to N as her BFF (which I find cute).

I wasn’t worried at all about letting her sleep over at N's house. N’s parents are wonderful, caring people, and N is a nice little girl. TPT is well-behaved and not a troublesome kid. But she eats poorly when she is not in her usual element, such as on vacation or at parties. I warned N’s mom (C) that this might happen. The following is the email exchange between C and me yesterday:

ND: The sleepover was a success, as per [TPT]. Thanks so much for hosting (hostessing?) her. She is now looking forward to the next sleepover with N, especially since I said that the girls can both sleep in the big bed in the guest room. She was wiped out, though. When she got in the house, she started an art project in the dining room. When I came up about 30 minutes later, she was sacked out on the couch, drooling onto the pillow. She slept for about 2 hours and was hard to wake up even then.

C: I think it went really well, although apparently all the food we serve at our house is totally disgusting! :-) …They didn’t get to bed until after 9:00. They woke up Sun before 6am (!) and played until it was time to skate. Everybody was wiped out yesterday afternoon—including me!

ND: Did she actually say "disgusting"? If so, then we will be having a discussion on manners. Unfortunately her palate is fairly narrow (like her father's). She likes what she likes and not much else (although that is fairly typical of kids in general). She ate a snack (ice cream and chicken wings!) and a big dinner to make up for it.

C: No, don’t worry about it. My girls started it by saying EWWWWW as soon as I put the plates down. I need to talk to them about manners even to their old Mom! It was baked ziti—noodles, sauce, ground beef, and cheese. I guess my mistake was in mixing the ingredients because they like all of these things in other forms. [TPT] was also suspicious of the cranberry muffins (from a mix) the next morning and wouldn’t eat a bite. She survived on a bowl of cheerios. But you had warned me that this might happen, so I didn’t press.

Here are some pictures of the girls at the sleepover... 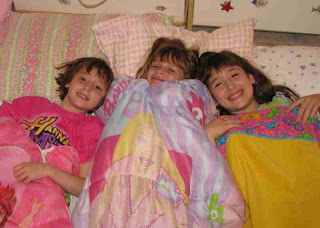 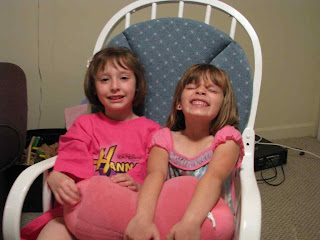 After the sleepover, TPT wants a sister even more!
Posted by neurondoc at 11:38 AM

Amazingly, when my kids go for sleepovers at friends houses, my wife and I get to know the next day that they willingly ate things they would not touch at the family table...

Ah, kids, they're so cute, and yet they can drive you crazy.

We get told that our kids are very polite and so well-behaved, say thank you and please all the time and clean up without being asked.

My usual reply is, "I don't know but those are not the kids I live with! Can I have those other ones? They sound like they would be great to have around!"