Baaaaa, I am a sheep.

I have so far avoided Mafia Wars, Dragon Wars, and other sundry Facebook games. I did do something called Lil Green Patch for a while, but I doubt that any money really went to save the rainforests, and some of the "plants" were decidedly creepy. But when the Incomparable Anne wrote up a post about Farmtown, it tweaked my interest. So I signed up and started farming. It is a slow-going (slow-growing?) game in which nobody gets shot or killed. It reminds me a lot of an earlier version of SimCity, especially the farm section.

I am planning to save up for more land and then a farmhouse. How bucolic of me... 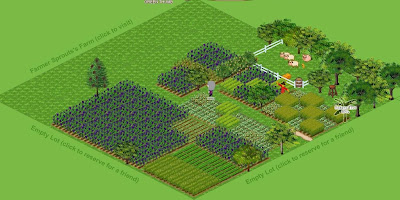 The grapes are especially colorful, and the animals remain contained inside the fence, unlike at Nathan's farm. Anne (aka my own personal Dr. Herriot) had to come over once and help me revive the sheep, because they fainted or got paralyzed and aphasic or developed hoof-and-mouth disease. Thankfully, they were revivable and didn't need to be euthanized. And they now have a chicken and a pig to play with.

TheHusband is mistakenly under the opinion that he will get bacon, ham, fried chicken, and lamb chops out of the deal. If I could grow broccoli, I'd dedicate that field to him.

I do need a few more neighbors, because it's lonely out there, so come on over and play...
Posted by neurondoc at 3:39 PM

I was just updating my L'il Green Patch, and did some calculations. They state that over 141 million square feet of rainforest have been saved. That works out to 5.1 square miles. Not quite so impressive.

Nathan's is looking much nicer now. And his animals stay in the pen. ;)

Yeah, yeah, yeah. I know Nathan's animals are now staying put. But I just couldn't help being snarky. His farm (and yours, too) look much better than mine. Although I am having fun futzing around.

My animals DO NOT stay in the pen. They merely visit it for naps.

I've discovered that if you keep them penned in the develop things like hoof and mouth disease and and aphasia and such. I like my way better.

And I too, am holding out for bacon and lamb chops. I have faith in our virtual overlords.

I'm here. Where are you?

Gee, it sounds like my house...minus any sheep, sadly. Tell TH that he can't eat your sheep, because I will buy them from you for pets. They can mow my grass, and TPT can play with them when she visits my doorbell.

And how do you get this bucolic lifestyle going?

P.S. In RL: one of my fancy pigeons made a break for it today, but returned a few hours later when she discovered that it is a HARD life at 101 degrees and no food and water kindly provided in bowls. Also, Buffy's (my Buff Orpington) foot was much better so she got to return to the rest of the Gang of Five. The backyard is now returned to normal. But I really, really want a sheep.

I have been assiduously ignoring the app - I don't have time. Plant something for me! :)

You are showing your prejudices however - time for farmtown but not TWITTER? (and I am doing the same in reverse...) LOL

And I don't see Twitter as a waste of time per se, just not something I am really interested in. Although given the strength of the numbers against me (including Jim [how the heck did you guys manage that?], I suspect that I will be assimilated.

HA! I have neither. No cell phone yet either.

I may eventually be assimilated, but it will be at a time and place of my own choosing.

I love the conversations that arise from Farmtown. :D

One of my first thoughts on waking up this morning was that I hope my crops haven't spoiled; have to run harvest them :)

I wake up thinking "gotta put down some grapes so I have something to harvest in a few hours." ;) I don't dare plant grapes at bedtime; I never sleep less than 8 hours (unless I'm getting up to rush off somewhere) and they'd be dead.

Yes, we seem to have snared Tania. As for the grapes -- I have slept through them. The wasted brown fields made me sad.

"And they now have a chicken and a pig to play with."

So, they are going to get both avian and swine flu all at once? o.O